As people with cameras at arm’s length in today’s world, we habitually train ourselves to see frames all around us sans camera. Naturally, we *think* we’re on top of recording the important stories in our own lives.

What *don’t* we see, because our own lens has become distorted from influence or simply from taking parts of our lives for granted?

Photographer Nicole Miller-Cline shares an important story in her family’s life and what she learned in hindsight after a tragedy robbed her of recording the story how she wanted to.

Nicole joined The Preservation Project knowing change was ahead. She said,

“All these little things added up and I needed to have something physical to hang onto this time period in our lives, because it’s all going to be different next year.”

Top of heart to record:

Nicole and her family had Sunday Dinners at her parent’s house for over 10 years.

Every Sunday, the story was the same. In Nicole’s words:

We pull into their driveway and the kids get so excited. They run out of the car, run up my parent’s porch and into their house. My parents’ dog, Stella, goes crazy, like we were separated for a year.

We get there early enough to play in their beautiful, grassy, perfect backyard: football, croquet, and we’ve had a million water balloon fights out there. Then, we come in, eat dinner around the table, and we usually spend about an hour at the table just eating and talking.

Everything that had gone on that week, but also, ask my parents things like, “Have you guys heard of this? What are your thoughts on this?”

We talk through so many things…

“I’m thinking about taking a new job.” Or, my parents were thinking about retirement coming up and what their plans are. Or, “Can you guys house sit for us?” because they’re going to Hawaii in January.

We sit at our spots at the table. My dad always sits at the head of the table — “his King spot.” (in a funny way, not in a weird, controlling way)

Right next to the table is where my brother and I measured ourselves, growing, all the way through childhood. On the opposite side of that doorway is where my kids measure themselves growing too. So, a lot of Sunday nights, our kids check it to see if they’ve grown anymore since the last time.

After dinner, it’s usually rough housing with my dad while my mom and I clean dinner. They have wood floors and my dad pulls them through the house on the rug. They wrestle. There’s lots of pony rides and hide-and-go-seek.

At the end of the night, we all settle down, sit in their living room, and, together, watch America’s Funniest Home Videos. We’re big fans; we watch every Sunday. Then, it’s 8 o’clock and time to go. I sometimes change the little kids into their pajamas before we go just in case they fall asleep on the 2 mile drive home and… that’s it.”

I asked Nicole how these dinners felt. She said,

“COMFORT. Predictable, safe, reliable. Something we always came back to that centered us at the end of the week and geared us up for the next.”

As Nicole prepared to intentionally record the Sunday Dinner story, a rapid moving wildfire wiped out both Nicole and her parents’ Paradise, California homes in November 2018.

“I’m kicking myself, because I wanted to make this really beautiful video tribute,” she told me the following month.

On why she hadn’t already documented Sunday Dinners in the way that was in her heart already, she said:

I documented a lot in the summer and a lot of it was outside playing, but I never really documented the sitting down and talking and cuddling parts that were the *really* important parts of it.

I’d wanted to do it… it was such a big deal and so much of our lives, but I was doing the beautiful, easy parts to capture.

It’s so easy if we’re gonna go have a water fight at sunset — those are really pretty + fun pictures. I can take a sunset picture all day long. It’s easy and beautiful.

Through The Preservation Project process, Nicole wrote the Sunday Dinner story on paper prior to the fire as a way to think though the story.

She was also fortunate to find she had about 100 photographs of Sunday Dinners already and intends to print them into an album.

However, there’s a caveat. They only tell *part* of the Sunday Dinner story. This is a familiar, yet often unaware problem among those immersed in making “great” or “better” pictures.

We photograph so much, so often, that we develop a filtered (like, “beautiful”) lens or meld into certain habits that cause us to MISS important stories entirely. We get some great stuff along the way, yes, but we can also easily we dismiss or overlook high-value stories when we try so hard to make the next award-worthy photo.

A growth-mindset, or waiting a little too long in Nicole’s case, can come at a cost. 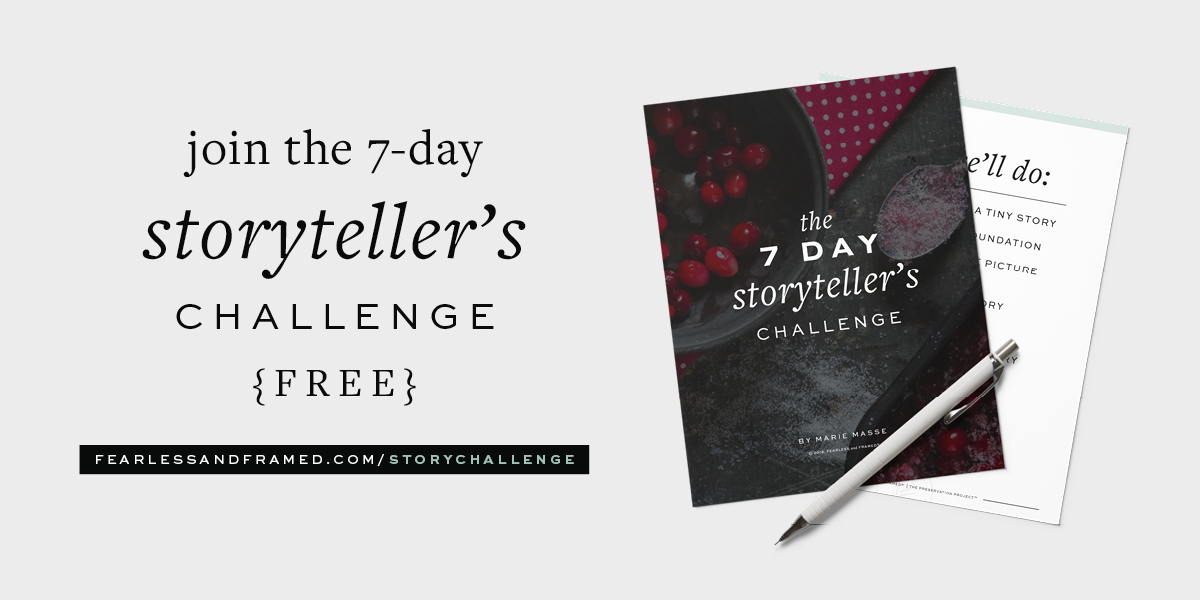 What stories in your life are at risk from being forgotten, unnoticed, or a missed opportunity, because you’re focused on what’s next, what’s new, what’s beautiful, the right time, etc.?

The Preservation Project is here to help you cling like hell to what matters while you grow and live your ever-changing life.